Node.js in Dirigible? Are you kidding?

Why do I need Node.js, when I already have Enterprise JavaScript?

Well, it was a few years ago when we defined what Enterprise JavaScript is. We described it as a set of stable API facades in the JavaScript language, which can be used by business application developers to reliably code against these API facades. For simplicity, we chose the synchronous model with blocking API, handled in a multi-threaded environment to lower the entry barrier for our target group of developers. More details can be found in the Why Enterprise JavaScript? and Understanding Dirigible blog posts.

Having these reasons in mind, we set a border line between how we understand the usage of the JavaScript language and how the Node.js guys have implemented it. We are targeting different scenarios, that is why we have never striven to be compatible with it. This is still true for the main scenarios that we target.

What about the "Function as a Service" scenarios? No doubt, there are cases and types of functionalities, which are simple (e.g. single action), short-living (quickly executable), rarely triggered, stateless, contextless, and atomic enough (without external dependencies), that can be run as "functions" only. This can reduce the required computation power for the execution in scale. Hence, this can significantly reduce the cost.

The current Java-based runtime of Dirigible is not quite suitable for such cases. It has a longer bootstrap time, as well as a bigger memory footprint for the initialization in comparison with more lightweight frameworks like Node.js and Go. Hence, the natural path forward is to introduce Node.js and Go support to be able to offload the main stateful business application instances by moving the stateless modules out as "functions". This can be beneficial in a well-managed, highly distributed environment such as Kubernetes clusters. Otherwise, we recommend the standard built-in message-driven approach as well as the BPM capabilities of Dirigible.

Recently, we introduced a feature that allows the developer to write modules in any native language, which is supported by the underlying operation system. Then such modules can be executed as regular Dirigible services. We pipe the input and output streams and provide the result of the execution as a response to the HTTP call. The main purpose of this functionality is to allow developers to implement complementary extensions for their business applications via arbitrary integration channels not supported by the Dirigible core runtime out of the box. The simplest example is just to run a shell script.

There are three noteworthy features of the Command Engine: 1. You can use different command line arguments depending on the target OS e.g. linux, mac, windows 2. You can set environment variables before the execution and also define the ones to be cleared 3. The target directory of the execution is set as the root directory of the Registry space of the Dirigible Repository (in case of File-System Repository)

How to execute my Node.js code?

Let's assume that you already have Node.js installed on your machine or container where the Dirigible instance is running. To test that, open the Terminal perspective and type:

If the command is unknown, install Node.js depending on your operating system - package-manager

Note: If you have noticed the "Hello from Node!" message in the Console view, it is still executed by the built-in JavaScript engine - stay calm. 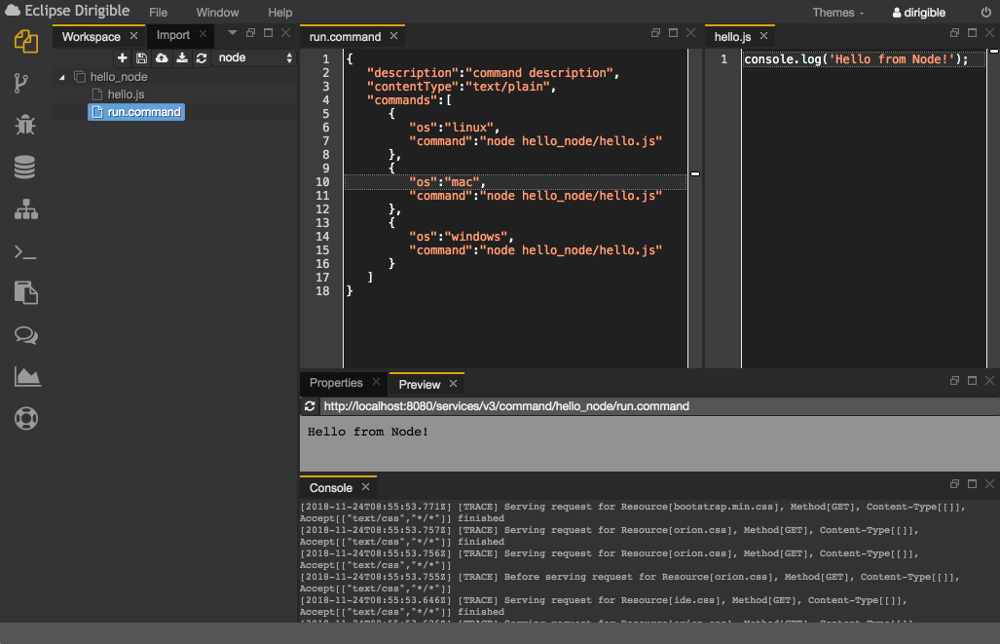 The simplest scenario with a single script file works well, what about multiple files with cross references? 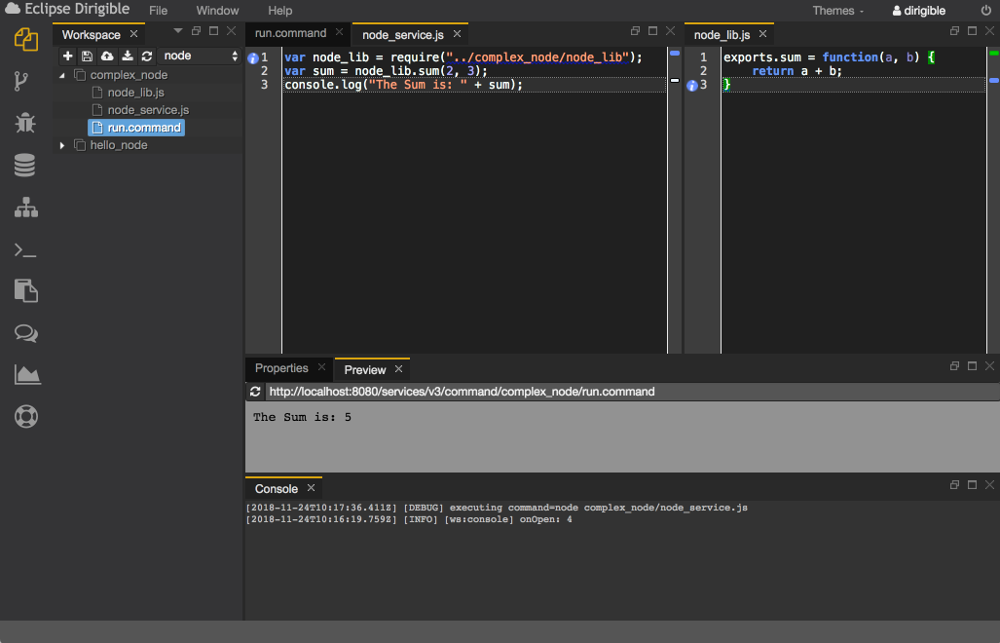 Node.js is cool, but it is still JavaScript. What about Go?

Well, let's try a simple Go program following the same approach. If you do not have Go installed on your machine or container, just follow these instructions. 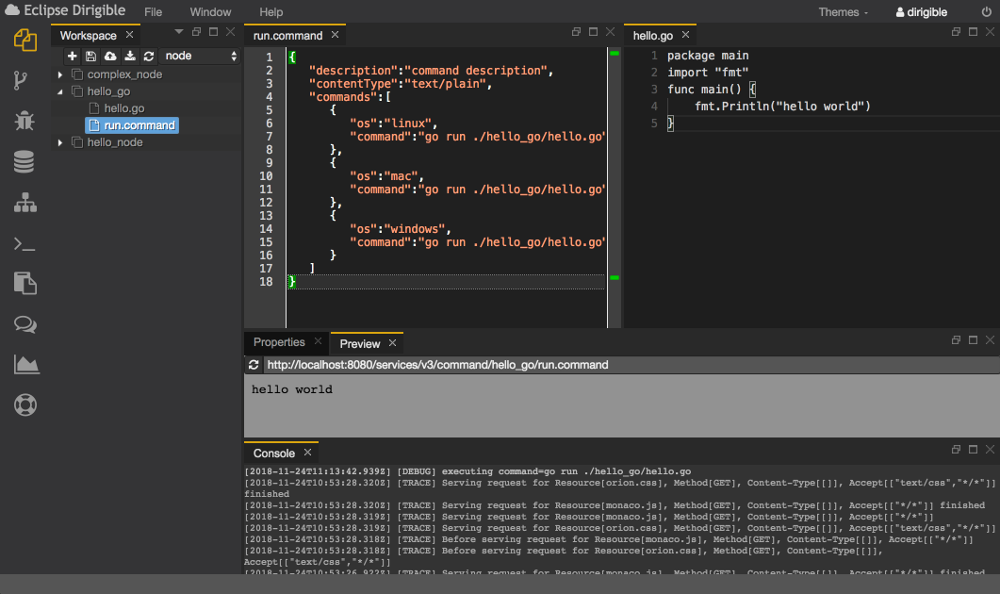 That was nice! Can I run Java maybe?

Let's assume that for some reason you would like to write a "function" module in the Java programming language (e.g. with the newest GraalVM). In this case we will need a preliminary step to compile the Java class before the execution.

We have to admit that the introduction of the new Command engine is just the first step in the direction of the native multi-language support in Dirigible.

There is still a lot to be done to adapt the Language Server Protocol extensions for the different languages. Fortunately, there are already very good examples available on how to do this at the backend like Eclipse standalone IDE, and in the editors - Monaco and Orion. But still, this is not a trivial task and it will take some time to implement in Dirigible.

Another idea is to have a pool of running native servers, e.g Express nodes, to push the code to and to use them as external executors. In this case, we can pipe the network Socket streams instead of the standard in/out streams. This approach can lay the foundation for many more scenarios as well.

Integration with the actual "Function as a Service" offerings by the Cloud platforms is also something that is yet to come. For instance, a tool for building Docker images based on these native modules and Cloud platform Registry integration would be a very useful feature of the Dirigible Web IDE.

Well, for those of you who have read the blog post too fast, it explains how to write native modules in Node.js, Go, and Java and use them as integrated services in Dirigible environment.